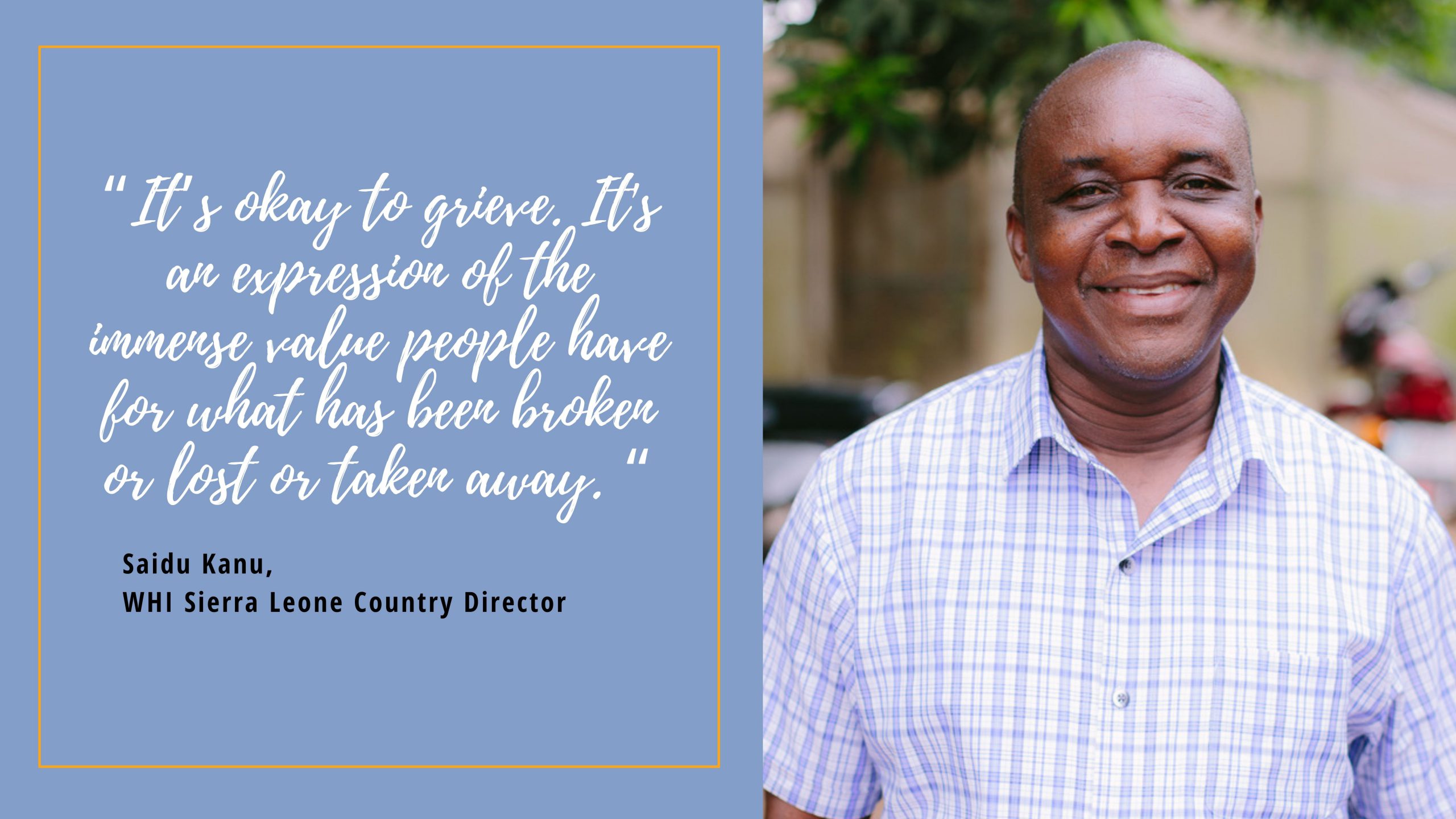 Moving From Grief to Hope

Saidu Kanu, World Hope’s Country Director for Sierra Leone, shares some personal reflections and offers this message of healing and hope as he reflects on the turbulent events that took place in Sierra Leone on January 6th, 1999, and on January 6th, 2021 in the United States and Ghana.

January 6 is a day that brings unpleasant memories to the people of Sierra Leone. It was on that day in 1999 that rebels entered and invaded the capital city of Freetown. Thousands of civilians were killed or maimed. Hundreds of houses burnt and thousands were displaced. As Sierra Leoneans were reflecting on that day last week, the news came that the US Capitol was being invaded by mobs to prevent the certification of Joe Biden as President of the United States. Many on WhatsApp thought it was fake news. The US is not a banana republic where such incidents are not uncommon. As the hours passed, it became clear that indeed it was true. The mob invaded the citadel of American democracy, the Capitol. This was unbelievable.

On the same day in Ghana, there was a fight in parliament for the election of House Speaker. Has America become like any other country where dictators hold on to power at all cost and use the mob or the security personnel to perpetuate them in office?

For many, the incident provoked very strong reactions and grief. What has gone wrong with the leader of the free world? What moral authority will the US have to call out those countries which flout democracy and the rule of law? What example is America showing to the rest of the world?

The feelings that people are experiencing as a result of the events of January 6 on the Capitol are normal for people who are grieving. We grieve when we lose someone or something we love and hold dear. Grief brings an initial sting of pain and anger. The feeling returns when we are reminded of our loss. It can come on suddenly and before we know it, we are full of anger and feel absolutely hopeless.

There are at least two actions we can take to help us make it through.

People should grieve. Privately or publicly, as per their personality. It’s okay to grieve. It’s an expression of the immense value people have for what has been broken or lost or taken away. The greater the value, the greater the pain and anger.

Unfortunately, grieving cannot be rushed or ignored or suppressed or be shut out of one’s mind. People should support each other as they go THROUGH the grieving process. There are no shortcuts. There are no easy answers. Grieving is an extremely painful and difficult experience However, we mustn’t allow grief to strangle us.

Now, will people survive this season of grieving? Absolutely! And come out on the other end stronger and wiser? Precisely.

And one gift we may receive from this experience is that of empathy.

I believe God will pour a double dose of empathy on people at the other end of grieving. Empathy for one another and for other nations around the world who experience political turmoil or coup d’état.

Until now, it has seemed that the average US citizen did not understand or had little understanding of the impact of political turmoil on the lives of people in other countries, though global NGOs like World Hope international do. But all put together, those who understand were like a drop of water in the ocean. Hopefully, through this experience, that will change and most people will begin to show greater empathy for citizens in other countries who are going through political unrest.

Another gift is authenticity. We have a saying in Sierra Leone, “Never say never, as long as you are alive. Rather say, ‘So far in life I have not had this kind of experience.’”

On one hand, these events are a grim reminder of the problem of the human heart, and on the other, that we all have the same need for redemption. We all need continuous forgiveness. We are struggling together as the human race, whether in the US, Europe, Asia, Africa, Australia, etc—whoever we are and wherever we live. We need grace. Super humans don’t exist on planet earth; only humans. And they are fallible, but God is in the process of transforming us.

As we grieve we should not forget the big picture. If we solely focus on the pain, anger and the hopelessness we will miss out on the big picture. Rather, we should lift up our eyes and then our hope elevates. Turning our eyes from grief to God is a process, not an event. It is going to take time. We need to be patient with ourselves.

I believe God is still in charge of the affairs of men and women. America is in his hands. We are in his hands too. He will not leave us. And he will not disappoint us like our political leaders have done or are doing; He is still there. Beside us. Comforting. Loving. Caring. No matter whether we feel or don’t feel or how we feel.

During 10 years of war in Sierra Leone, that’s how we lived. Trusting. Holding on. Knowing that we have an anchor. Did we enjoy the suffering? No! Was coming close to death pleasant? No!
Was being uprooted from one’s country and living as a refugee in another country pleasant? No! But we held on to hope.

I am confident that the people of the US will make it. They will come through—and come out stronger and more trusting and with greater faith than they had before the sad events of the past week.

And remember this: there is nothing that has touched our lives that God can’t use for His Glory and our blessing.

World Hope International works around the world to provide opportunity, dignity, and hope. To support these efforts, you can make a gift to The Hope Fund, which allows us to respond where and when it matters and continue projects centered on clean water & energy, protection, global health, and social enterprises.